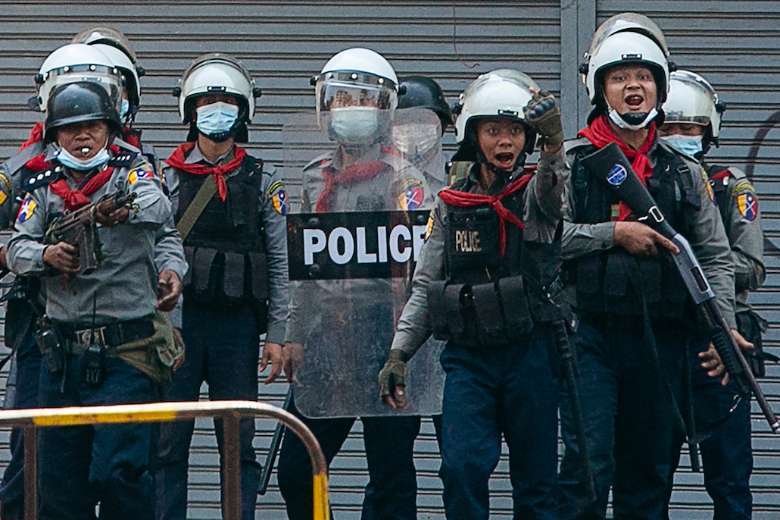 WOULD YOU LIKE TO REACH MILLIONS OF AUDIENCE WORLDWIDE AS AN ARTISTE THROUGH OUR PROMOTIONAL SERVICES? CALL/WHATSAPP US NOW:  +2348135344573

Police gesture toward protesters as security forces crack down on demonstrations against the military coup in Yangon on Feb. 28. At least 18 protesters were shot dead. (Photo: Sai Aung Main/AFP)

Cardinal Charles Bo of Yangon has called for patience and tolerance as at least 18 anti-coup protesters were shot dead by Myanmar security forces on Feb. 28, the bloodiest day since the Feb. 1 military coup. He said the streets of Myanmar have seen so much pain, suffering and resistance. “Let us all believe in the power of love and reconciliation,” Cardinal Bo said in a Feb. 28 homily. “We are all sons and daughters of the same land, same mother Myanmar, and we need to exercise patience and tolerance.

“If you want to be a leader, you must serve. Service is the greatest power, not guns. Make peace our destiny, not conflict. Arms are useless. Rearm ourselves with reconciliation and dialogue.” Hundreds of Catholic laypeople joined by priests and nuns marched in Mandalay on Feb. 28 saying the rosary and calling for a peaceful solution to the crisis. The second Sunday of Lent saw violence erupt in Yangon, Mandalay, Dawei, Myeik, Bago and Pokokku when police and soldiers opened fire on crowds protesting against military rule. The United Nations rights office said at least 18 people were killed and more than 30 wounded. Some media reported that as many as 26 died. Tear gas was also reportedly used in various locations as well as flash-bang and stun grenades.

The intensive crackdown has drawn strong condemnation from the UN, the European Union and other countries including the US

HOW DO YOU FEEL ABOUT THIS SONG? PLEASE KINDLY DROP A COMMENT FOR THIS SONG BELOW!

Roman DC comes through with a new single dubbed ”Fire”