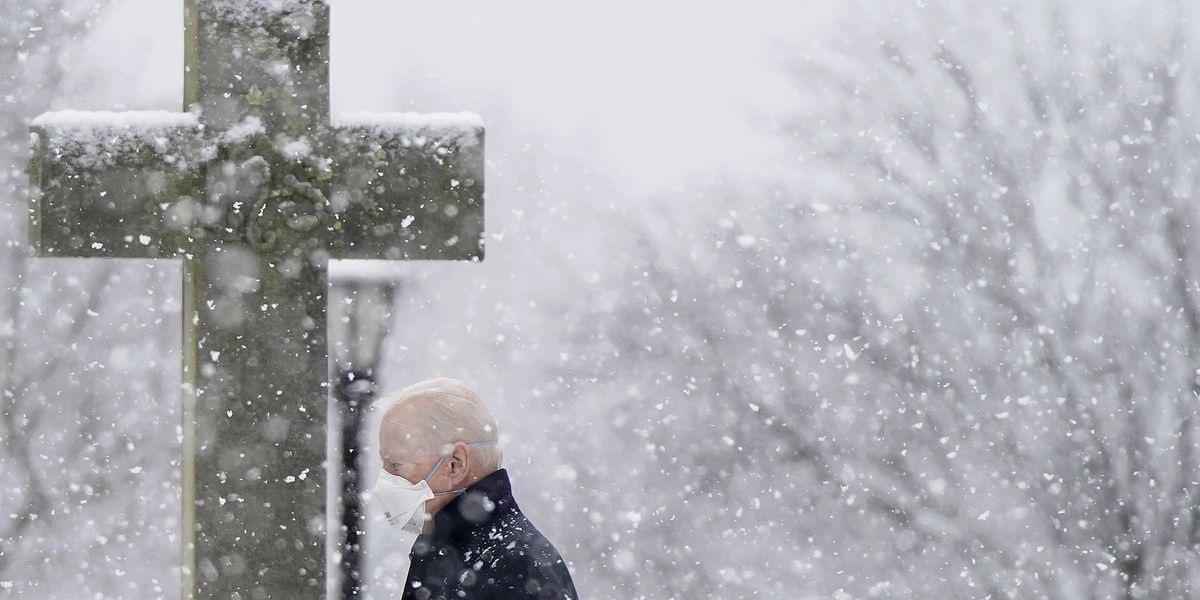 At his inauguration, President Joe Biden promised to be a unifying leader. But, 100 days and several faith-related policy moves later, religious groups remain divided over whether he has their best interests in mind.

More liberal denominations have applauded many of Biden’s actions, including efforts to reduce anti-LGBTQ discrimination and boost abortion rights. But these same decisions angered conservative people of faith, including leaders from Biden’s own church.

“The unalienable dignity of women and their unborn children deserves so much more,” said one Catholic archbishop after the Biden administration announced it would increase access to a chemical abortion pill.

He and other Catholic leaders are so angry with the president’s approach to abortion rights that they’ll vote this summer on whether Biden should still take communion, according to The Associated Press.

When faith groups from across the political spectrum have united, it’s usually been to push back against something Biden has done. For example, religious leaders of all stripes cried out when the administration tried to keep a Trump-era plan for refugee admissions in place.

“We’re in a global refugee crisis,” said Mark Hetfield, president and CEO of HIAS, a Jewish refugee resettlement organization, to Religion News Service last month. “This is a time to demonstrate real leadership.”

Overall, around half of Catholics (58%) and Protestants (47%) approve of the job Biden has done so far, according to Gallup. By comparison, 71% of religiously unaffiliated Americans are pleased with the president after 100 days.

Here’s a list of Biden’s key faith-related actions from the past three months, as well as notable responses from religious leaders.

“We have fought tirelessly for this moment,” said Iman Awad, legislative director for the Muslim group Emgage Action, in a statement at the time.

The travel ban, which Trump presented as a national security measure, was seen by many faith groups as an assault on religious freedom. Leaders from a variety of denominations praised Biden for standing up for Muslims’ rights.

The policy change “will help ensure that those fleeing persecution and seeking refuge or seeking to reunify with family in the United States will not be turned away because of what country they are from or what religion they practice,” said leaders from the U.S. Conference of Catholic Bishops.

Faith groups were also broadly supportive of Biden’s early work on immigration reform, which began on Inauguration Day. That’s when he sent his immigration plan to Congress and signed executive orders pausing certain deportations, as well as construction on the border wall.

“We … celebrate what this legislative proposal symbolizes: a renewed appreciation for the ways in which the United States is strengthened by the contributions of immigrants,” said Rabbi Jonah Dov Pesner, director of the Religious Action Center of Reform Judaism, in a statement on Biden’s immigration bill.

Since January, some of these good feelings have fizzled out, as the situation at the U.S.-Mexico border has grown more chaotic. But many religious leaders are confident that Biden remains committed to putting humane policies in place.

“We know that changes will take time but applaud President Biden’s commitment to prioritize assisting our immigrant and refugee brothers and sisters,” said Bishop Mario E. Dorsonville, chairman of the U.S. Conference of Catholic Bishop’s Committee on Migration, in a February statement.

In yet another executive order signed on Inauguration Day, Biden took aim at anti-LGBTQ discrimination. The order expands federal civil rights protections by stating that existing bans on “sex discrimination” cover attacks on gay and transgender people, as well.

“It is the policy of my administration to prevent and combat discrimination on the basis of gender identity and sexual orientation,” Biden wrote.

Leaders from more conservative faith groups were quick to point out that such a policy change could put church-state partnerships in jeopardy.

Federal officials may interpret the order to mean they shouldn’t work with denominations that oppose same-sex marriage, said Tony Perkins, president of the Family Research Council, in a January statement.

“Ultimately, if this executive order is able to be fully carried out, it will affect everyday Americans who hold biblical and conservative values,” he said.

Ryan Anderson, president of the Ethics and Public Policy Center in Washington, D.C., tweeted that the order undermined Biden’s promise to work toward unity.

“Calls for unity while advancing (a) radical, divisive agenda ring hollow,” he said.

Conservative religious leaders were also outraged by Biden’s decision to revoke the so-called Mexico City Policy, which kept some recipients of U.S. aid money from discussing abortion with their clients.

“Foreign aid is a vital part of American leadership in the world and should be used to protect life, not end it,” said Russell Moore, president of the Southern Baptist Convention’s Ethics and Religious Liberty Commission, in a statement on the decision.

Biden is far from the first Democratic president to rescind the rule, but his Catholicism made the decision more controversial.

The Catholic Church officially opposes abortion rights. However, surveys have shown that around half of Catholics believe abortion should be legal.

“It is grievous that one of President Biden’s first official acts actively promotes the destruction of human lives in developing nations,” said leaders from the U.S. Conference of Catholic Bishops in a January statement.

At several points in his presidency so far, Biden has leaned on faith groups to help him achieve his goals. For example, he’s urged religious leaders to talk to their congregations about the COVID-19 vaccine.

Getting vaccinated is “how we’re going to defeat this virus and that’s how we’re going to come together again in our communities, in our houses of worship,” he said during an April 1 call with pastors and other community leaders, according to The Hill.

In February, Biden showed his support for more formal church-state partnerships by reestablishing the White House Office of Faith-based and Neighborhood Partnerships. For the past two decades, the office has helped coordinate government outreach to religious organizations.

“I’m reestablishing the (office) to work with leaders of different faiths and backgrounds who are the frontlines of their communities in crisis and who can help us heal, unite and rebuild,” Biden said at the time.

A wide variety of religious leaders celebrated the move, as well as Biden’s decision to appoint Melissa Rogers, an expert on religion and policy, to lead the office.

“When she served in the Obama administration, Rogers successfully worked with people across faiths and the nonreligious to adopt policies that protect the religious freedom of people who use federally funded social services,” said Rachel Laser, president and CEO of Americans United for Separation of Church and State, in a Feb. 14 statement.

One month after angering some conservatives with his executive order on LGBTQ discrimination, Biden stirred up more controversy by reiterating his support for the Equality Act, legislation that would add protections for gay and transgender Americans to the federal Civil Rights Act.

The bill would also limit certain religious freedom protections, leaving faith-based organizations more vulnerable to discrimination lawsuits. For this reason, some religious leaders have asked policymakers to either revise the Equality Act or abandon it.

“The Equality Act would discriminate against people of faith,” wrote five leaders from the U.S. Conference of Catholic Bishops in a February letter to Congress

Other faith leaders share Biden’s support for the bill, which passed the House on Feb. 25. They applaud the president for acknowledging that LGBTQ rights and religious freedom do not need to be in conflict.

“The Equality Act is a step forward to the full — and overdue — citizenship rights for LGBTQ persons,” said Rabbi Jack Moline, president of Interfaith Alliance, in a February statement.

The Equality Act is currently awaiting Senate action. Biden urged policymakers to make the legislation a priority during his address to Congress on April 28.

“I … hope Congress can get to my desk the Equality Act to protect the rights of LGBTQ Americans,” he said.

Biden has yet to weigh in on the Fairness for All Act, which is sponsored by Rep. Chris Stewart, a Republican from Utah.

Unlike the Equality Act, the bill would balance LGBTQ civil rights protections with enhanced religious freedom rights. For this reason, it may be more palatable for Republican leaders and, therefore, have an easier route through the Senate.

In March, the Biden administration, along with Canada, the United Kingdom and the European Union, sanctioned Chinese leaders over their treatment of ethnic and religious minority groups. Religious freedom advocates saw the coordinated action as a powerful step toward protecting people of faith around the world.

Later that month, Biden’s State Department described China’s actions toward its Muslim citizens as “genocide and crimes against humanity” in a report on human rights practices around the world.

The Council on American-Islamic Relations is among the faith groups that have praised Biden for being tough on China while also calling on him to do even more.

“Now that the Biden administration has recognized that China is committing genocide, our nation must take every possible action to stand against these crimes against humanity,” said the council’s executive director, Nihad Awad, in a March statement.

Biden’s most contentious faith-related decision came in mid-April, when the administration announced it would not raise a Trump-era limit on refugee admissions as soon as originally planned.

The pushback from people of faith was swift and intense. Religious leaders from across the political spectrum accused Biden of breaking his promises.

“The number of refugees who will be welcomed this year is far short of what we can do as a country and is not an adequate response to the immense resettlement need,” said Bishop Mario E. Dorsonville, chairman of the U.S. Conference of Catholic Bishops’ Committee on Migration, in a statement released April 19.

Within a few hours, officials from the Biden administration announced it would reconsider the original plan. Refugee resettlement experts expect the new ceiling to be announced sometime in May.

“As Jews, we know too well the harm of turning away those seeking refugee. Our own historical experiences throughout the centuries remind us what it is like to be uprooted from home and to seek refuge in other countries. We demand nothing less than a significant increase in refugee admissions from an administration whose stated values must be matched by actions that reflect justice and compassion,” Rabbi Pesner from the Reform Jewish Movement said in a statement.