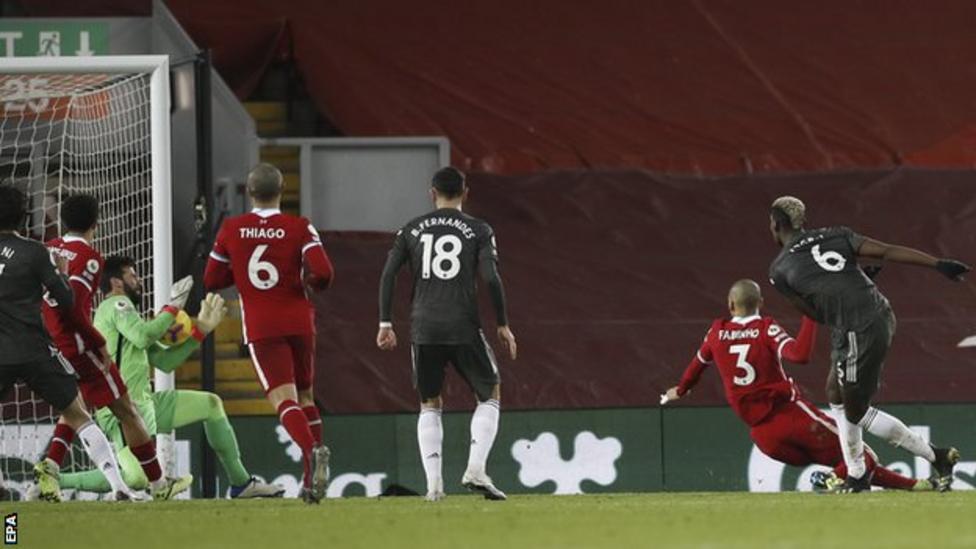 Manchester United stayed top of the Premier League with a mediocre goalless stalemate against champions Liverpool at Anfield.

It was a game that failed to justify the pre-match anticipation and while United manager Ole Gunnar Solskjaer may be happier with a point than Liverpool counterpart Jurgen Klopp, he will also know they had the better chances to claim a statement victory.

Liverpool dominated possession in the first half but it was United who came closest when Bruno Fernandes’ 20-yard free-kick curled inches wide.

Fernandes was then thwarted after the break by the outstretched leg of Liverpool keeper Alisson before Thiago’s long-range effort finally brought the previously unemployed David de Gea into action.

Alisson was Liverpool’s hero late on when he blocked Paul Pogba’s drive from point-blank range.

The result leaves United two points ahead of Leicester City in second. Liverpool, who have scored just one goal in their past four league games, are a point behind the Foxes in third.

Manchester City will move up to second, two points behind United, if they beat Crystal Palace in Sunday’s late game (19:15 GMT).

MUST READ:- How To Encrypt Your Bitcoin » Naijaloaded

Settling the score: celebrating the women erased from the musical canon | Classical music