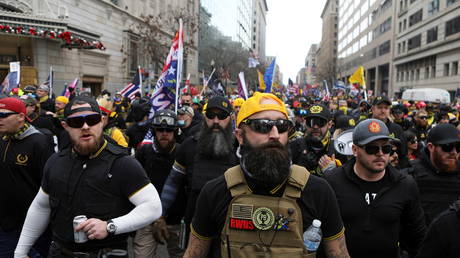 Canada’s parliament has unanimously passed a motion urging the federal government to label the Proud Boys a “terrorist” organization, accusing the right-wing group of using violence and preaching “hate.”

The House of Commons passed the measure without opposition on Monday, calling on Prime Minister Justin Trudeau’s Liberal government to “use all available tools to address the proliferation of white supremacists and hate groups starting with the immediately designating the Proud Boys as a terrorist entity.”

By unanimous consent, the #HoC adopted a motion regarding the proliferation of white supremacist and hate groups and the designation of the Proud Boys as a terrorist entity.

The motion was introduced by New Democratic Party (NDP) leader Jagmeet Singh, who celebrated its passage on Monday afternoon, though voiced a note of caution, stating that Trudeau “has a habit of breaking his promises” and can’t be trusted to “follow through” on the measure.

Our motion calling on the Liberal govt to designate Proud Boys as a Terrorist Org has passed!But, Justin Trudeau has a habit of breaking his promises.Sadly, we can’t trust him to follow through.We need to the pressure on, sign here to keep it going:https://t.co/KBzMGqQqpX

Singh moved to add the group to the “terrorist entities” blacklist almost immediately after the riot at the US Capitol on January 6, which saw a crowd of supporters of former president Donald Trump storm the building as Congress convened to certify Joe Biden’s election win. By January 7, the NDP chief launched a petition deeming the Proud Boys a “right-wing extremist group that promotes white supremacist views,” while stating that its members “joined a group armed with deadly weapons as they led an assault on the US Capitol.”

This was an act of domestic terrorism.

The Canadian government, for its part, said it is considering the terrorist designation, but has yet to pull the trigger, with Minister of Public Safety Bill Blair stating “We’re working very diligently to ensure that where the evidence is available… that we’ll deal appropriately” with the Proud Boys – a group created by Canadian citizen Gavin McInnes, a co-founder of Vice magazine.


If added to the terrorism list, the Proud Boys would join known militant groups such as al-Qaeda, the Islamic State and Boko Haram, also giving Canadian authorities the ability to seize assets from the organization. The push to label the group comes amid a similar offensive against “domestic extremists” in the US following the riot on Capitol Hill, with the new Joe Biden administration quickly ordering a “threat assessment” on such groups and the “role of social media” in the unrest on January 6.

While a spokesperson for Blair argued such designations are “not a political exercise” and must be based on “legal processes” and “concrete evidence,” many observers online have blasted Singh’s motion as a thinly veiled political gesture targeting a right-wing org, some suggesting there are “bigger fish” to fry than the Proud Boys – which was originally founded by McInnes in jest.

Now do BLM and Antifa…Have Proud Boys done any real damage in Canada? Or just said some naughty words?

I have no love at all for the Proud Boys, but it feels like we’re really lowering the bar on the definition of ‘terrorism’ here.

Meanwhile, the Canadian Anti-Hate Network – created to “monitor, research, and counter hate groups” – criticized the measure as too broad, saying that while some Proud Boys factions have “all the hallmarks of a terrorist organization,” it is nonetheless concerned about “definitions being loosened, power being misused, and eroding civil liberties or the criminalization of legitimate protest.” The network named “more threatening white supremacist” groups it said are more deserving of the ‘terrorism’ label.

This is a nonbinding motion. The PBs have NOT been designated a terrorist group today. The Canadian PBs have been misogynistic, racist, & violent, but that’s not enough for the terror list criteria- and there’s bigger fish. This merits discussion https://t.co/jLazgZnPHX#cdnpolihttps://t.co/Rwwgykxa4O

“There are more threatening white supremacist terrorist organizations. O9A and the Iron March legacy groups (eg. AWD and The Base) absolutely meet the criteria as written, and should be designated first.”O9A and IM legacy groups do murders/terror plots.https://t.co/jLazgZnPHX

David Hofmann, a professor of sociology at the University of New Brunswick, has also voiced skepticism in the designation. Last week, he told Public Radio International the move would have no “real strategic value,” predicting it would only scatter the Proud Boys into other groups and won’t “change the members’ ideas.”

Though the Proud Boys are an avowedly right-wing outfit that vocally supported Trump, the group’s current leader Enrique Tarrio – who identifies himself as “Afro-Cuban” – has repeatedly denied any connection to “white supremacy” and insists his organization is not a “hate group.”

Tarrio made headlines more recently after he was arrested in Washington, DC on property destruction charges, linked to a demonstration in December where he torched a Black Lives Matter banner belonging to a local church. The Proud Boys chairman has admitted to burning the sign, but claimed it wasn’t “about the color of someone’s skin,” but rather because “BLM is a Marxist movement… that has terrorized the citizens of [the United States].”

Also on rt.com
Proud Boys chairman arrested in DC for ‘destruction of property’ after last year’s torching of BLM banner

A Comparison Between Countries and Anthills