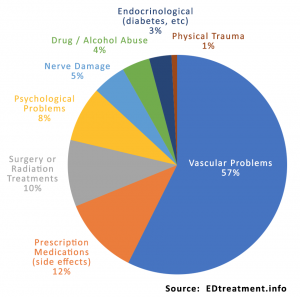 An erection seems like a simple thing, but it actually requires a long and complicated chain of processes involving the brain, hormones, emotions, nerves, muscles and blood vessels.  To understand these processes, read our article “How Do Erections Work?”

There are many different factors, both physical and psychological, that can interfere with these processes, and some are signs of serious medical conditions.  That’s why it’s important to consult a doctor if you are experiencing erectile dysfunction.

The major causes of erectile dysfunction include:

Many of the causes of ED are associated with aging, so it’s natural that the percentage of men suffering from erectile dysfunction is higher in older age groups.  However, in recent years the number of younger men suffering from ED has increased dramatically.  According to the Cleveland Clinic, 52% of men experience erectile dysfunction at some point in their lives.  It affects 40% of men age 40, and 70% of men age 70.

The underlying cause(s) of your ED will help your doctor determine the most suitable treatments.

Cardiovascular conditions.  The penis requires a healthy blood supply to become erect.  Here are some of the conditions that can limit blood flow:

A good strategy to minimize your chances of experiencing erectile dysfunction is to eat a heart-healthy diet and get regular aerobic exercise.

Medications.  Medications can interfere with the erection cycle in many ways.  There are several classes of drugs which may cause problems:

See our article on “Drugs That Can Cause ED.”

Neurological and nerve disorders.  Damage to the nerves interferes with the signals that are essential to the erection cycle:

Nerve damage can also be caused by surgery or radiation treatments for other conditions.  See “Physical Damage,”  below.

Obesity.  There is a strong correlation between obesity and ED.  Obese men are likely to have circulatory problems, and lower levels of testosterone.

Peyronie’s disease.  Scarring may damage the corpora cavernosa and prevent them from inflating with blood.

Physical damage to nerves, blood vessels, or the penile tissues, resulting from accidents, surgery, or radiation treatments.  Treatments for prostate cancer, including surgery and radiation treatments, often result in erectile dysfunction.  In some cases, nerves or blood vessels will eventually recover, but in other cases they may never heal, resulting in permanent erectile dysfunction.  Talk to your surgeon, urologist, or oncologist before treatment to understand the risks.

Rheumatoid Arthritis.  Swelling from arthritis may limit the blood flow in the penis.

Sleep disorders. Clinical studies have shown a week association between sleep apnea and lower testosterone levels and erectile dysfunction. In patients with obstructive sleep apnea (OSA), continuous positive airway pressure (CPAP) therapy may improve erectile function; however, the improvements are less than those shown with common oral medications for ED.

Smoking or other tobacco use.  Smoking can cause a plaque build-up in the arteries (atherosclerosis), which interferes with blood flow to the penis.

Venous leak.  A venous leak allows blood to leak, preventing the corpora cavernosa from becoming fully inflated.  Venous leaks may be caused by Peyronie’s disease, diabetes, or even severe stress.

Psychological issues can be very distracting and prevent feelings of arousal.  Stress and anxiety can also trigger the release of adrenaline, which interferes with erections in several ways.

Some of the conditions that can cause or contribute to ED include:

Depression.  Depression can cause or contribute to ED.  There is a simple online self-assessment to help you determine in you are suffering from depression.

Once your doctor identifies the cause of your Erectile Dysfunction, they will be able to recommend appropriate treatment for your condition.