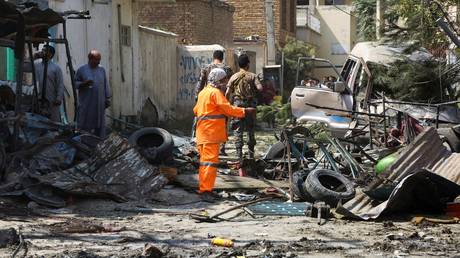 There were fewer terrorism attacks last year than the year before – but more people still died at the hands of terrorists in 2020 than in 2019, data from the Global Attack Index shows, as attacks became deadlier.

The data, analyzed by security consultancy Janes and released Tuesday, shows that 17,122 people died worldwide as a result of terror attacks in 2020 – 2,543 more fatalities than the year before – representing an increase of 17.4 percent.

That increase in fatalities happened despite there being 3.7 percent fewer terrorist attacks around the world.

“The overall downturn in attacks can be largely attributed to the July ceasefire in Ukraine’s Donbass region, which resulted in attacks dropping by one-third in the high-tempo separatist conflict,” said Matthew Henman, head of Terrorism and Security at Janes. “This decrease masked major shifts in violence in Afghanistan and key conflict zones in sub-Saharan Africa, though, where attacks and resultant fatalities rose dramatically.”

Also on rt.com
Whether or not the US leaves Afghanistan, the Taliban will stand triumphant and the violence won’t stop


More than one-third of all terror deaths in 2020 occurred in Afghanistan, with 6,627 people dying in 2,373 terror incidents. The country, coupled with Syria and Ukraine, cumulatively accounted for more than half of all attacks worldwide, Henman said. Janes noted that the increasing violence in Afghanistan was driven almost exclusively by Taliban attacks targeting the security forces, following a peace deal signed with the US government in February 2020.

Janes recorded double the number of attacks from 2019 to last year in the Democratic Republic of Congo (DRC) – with triple the number of deaths. It said the data showed this increase in both attacks and fatalities was caused by the Allied Democratic Forces targeting civilians in Nord Kivu and Ituri provinces.

Also on rt.com
Death toll rises to 98 after series of blasts at Equatorial Guinea military base


Iraq, however, reported a 50-percent increase in attacks to 1,466 in 2020 – largely driven by Islamic State’s Wilayat Al Iraq, or Iraq province, which accounted for half of all recorded Islamic State attacks worldwide in 2020.

10 Photo Stories That Will Challenge Your View Of The World

How to turn your website into an engine for your digital strategy goals.