Over the course of an almost four-hour session, Disguised Toast addressed a wide spectrum of topics, one of which was primarily related to relationships and marriage.

The 29-year-old former Hearthstone pro is one of the most popular faces in the streaming industry today, having amassed a stellar following online with his exploits in games such as Among Us.

Despite being one of the most entertaining and endearing personas in the streaming community, his personal life often tends to get swept under the rug.

Thank you Toast for the session with Dr K. It was eye opening. ❤️ From what we can see through the screen, you are a great and genuine person. Give yourself more credit. pic.twitter.com/6xjdThQBBk

This is why Disguised Toast’s recent interaction with Dr. K proved to be an intriguing watch, as it provided viewers with an intimate glimpse into the lives of one of the most popular streamers in today’s digital age.

Disguised Toast gets candid about love, relationships and marriage 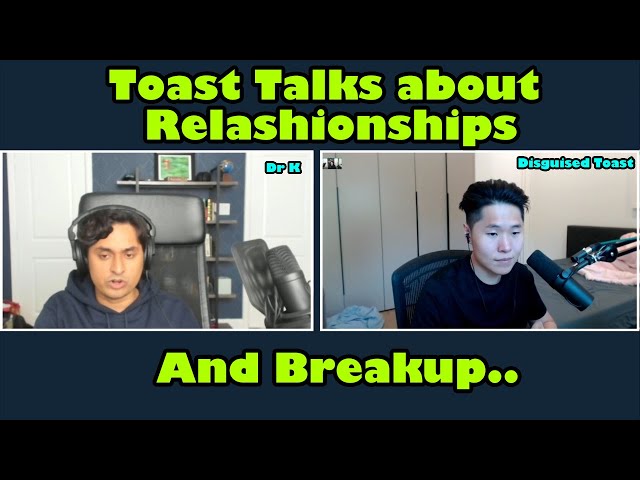 Disguised Toast’s recent interaction with Dr. K was tinged with a strong personal touch as the streamer delved deep into a plethora of topics.

From highlighting the importance of friends in his life to revealing his struggles with conveying his emotions, fans bore witness to a more vulnerable side of one of their favorite streamers.

With regards to relationships and marriage, Disguised Toast drew upon his own personal experiences and stated:

“I feel like I’m lying to a girl when I start dating them. Cause I feel like the girls are always going in with long commitment with the expectations that we’re going to get married and like when I enter dating or a relationship , it’s probably not going to work out. I always feel some anxiety. I’m misleading her and I should just break up with her now. I don’t feel like I ever went into a relationship with really high hopes and maybe I should have never gotten into those relationships in the first place.”

“Sometimes I wish I would come across a girl that makes me feel like *bam* I am ready for marriage. I don’t know if a girl like that exists . I think I need to be okay with the relationship not working out , because if I’m not okay with that , then anxiety eats me up. I don’t know what the future will hold, like when I think about divorces I should be okay with break-ups.”

He also revealed that it wasn’t marriage that scared him. Instead, it was the possibility of things not working out that always seemed to induce a state of heightened anxiety in him:

“I think I would want to know that I am going to marry this person before I start dating them, which is almost impossible because you kind of make that decision once you’re in a relationship . I’m okay with the idea of spending the rest of my life with someone, that part isn’t scary. The part that is scary is it not working out.”

Disguised Toast has been quite open about his love life so far, having previously been in a relationship with fellow streamer Janet Rose, aka “xChocoBars.”

The duo’s popularity was such that they were often referred to as “Joast.” They dated from 2018-2020 before formally announcing their breakup online.

Being a streamer in today’s double-edged digital age is certainly not a cakewalk. It has its fair share of pros and cons that need to be addressed from time to time.

This is why Disguised Toast’s candid revelations to Dr. K are sure to be lauded by the online community.

Dr. K is awesome 😁 And Toast definitely needs a hug. Care about yourself too Sir, why don’t ya? 😀❤️

Im glad toast did the Dr.k thing…that was needed for him to open up sites he never knew about, cuz he is a good guy <3

In light of his recent therapeutic session with Dr. K, fans will be hoping it has a long-term positive impact upon Disguised Toast.

Following The Truth Wherever It Leads / Heal Your Relationships Through Hypnosis

Scorpio's Relationships Will Thrive On 1 Particular Day In May