These “analog astronauts,” as they’re called, traveled to Maui, Hawaii, to stay in the dome-shaped Hawaii Space Exploration Analog Simulation (HI-SEAS) habitat, where they experienced life as it would be on the moon or Mars. Analog astronauts from NASA have participated in five such missions, their length ranging anywhere from four to 12 months. This past December, students Niko Blanks and Lea Miller took the trip, making personal dreams come true in the process.

“I definitely didn’t expect to have this opportunity as an undergrad,” said Blanks, a 22-year-old Spaceflight Operations senior. But within a week of applying, the Chattanooga, Tennessee, native was packing his bags and leaving for a two-week analog mission to Mars. 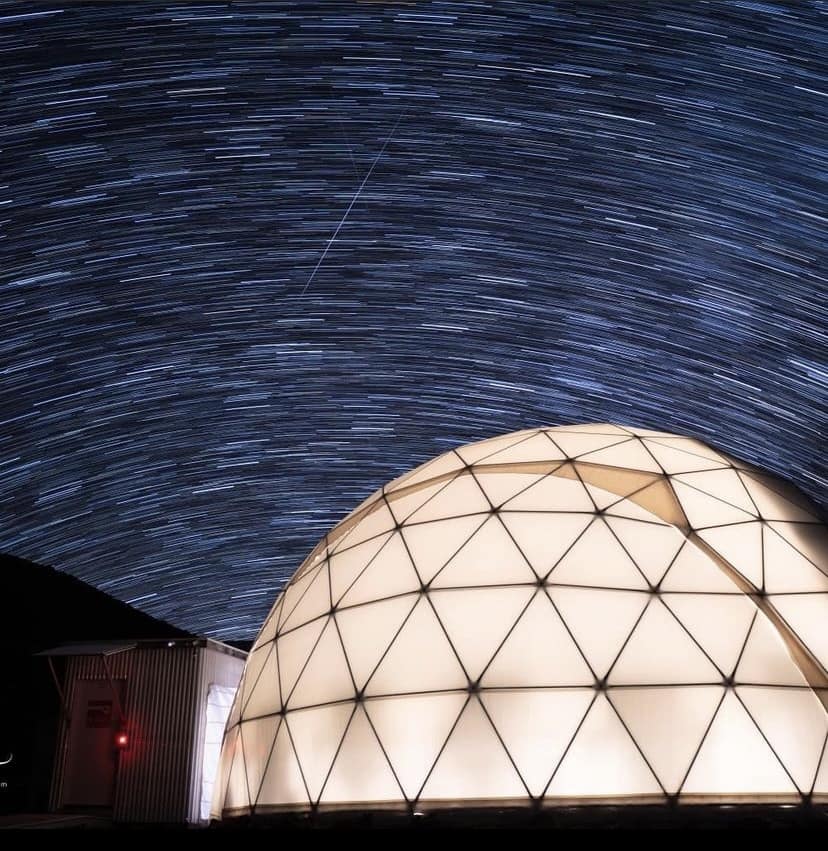 During their analog space mission, the students stayed in a domed habitat in Maui, Hawaii.

Lea Miller, a graduate student studying Human Factors, joined him. Their primary purpose: to conduct research on the human body.

Miller, a 25-year-old from Pearl River, New York, and former Embry-Riddle professor Ryan Kobrick, who now works at the Paragon Space Development Corporation in Lakewood, Colorado, began this research together years ago. Their project was called Prescription Extravehicular Activities (RXEVA), which sought to create a mission-planning tool that measured astronaut performance — metrics such as heart rate, energy expenditure, breathing rhythm, etc. — in order to offer task recommendations. The goal was to produce more efficient and alert astronauts.

During their mission, Miller and Blanks collected this data on themselves. They wore hexoskin smart shirts underneath their Extra Vehicular Activity suits, thick garments with multiple layers that astronauts wear to protect against the dangers of space, or in this case, the Hawaiian sun.

“(The suits) also have a data logger and some internal wiring that basically measures your activity level,” Miller said.

This data will be very important for longer-duration missions, especially future lunar and Mars missions, as well as those on the International Space Station, she added.

Kobrick agreed, stressing the importance of focusing on mission objectives before planning logistics.

“This is why astronaut selection is critical: It helps find the perfect match for the job expected,” he said. “Psychophysiological crew needs are extremely important to address especially for long-duration missions.”

While Blanks and Miller focused on the human body’s response to stress, their four habitat crewmates were busy with their own research projects. In one such project, they studied the microorganisms that live in the lava tubes of the Mauna Loa volcano, on which the habitat is located. Known as extremophiles, these organisms can flourish at extreme temperatures and conditions that would melt or freeze any other type of life. As the search for evidence of life on Mars continues, understanding extremophiles could be very useful to astronauts and humans on Earth.

While living in a dome on the side of a volcano can be exciting, there were moments when Miller and Blanks remembered missing the comforts of home, such as unlimited running water, solid food and grass. Without much leisure time, any opportunity to converse with their hab-mates was also appreciated.

“Meal times were definitely a big thing, just a way for all of us to come back together and not feel so isolated,” Miller said. “We would watch something, play cards. … We called it family time.”

The experience in the dome not only helped strengthen the students’ resumes, they said, but also their confidence.

“Such a rewarding experience,” Blanks said. “All the hard work I’ve put in up till now has gotten me here.”

Life on campus after the vaccine | Arts & Culture