Since his passing two days ago, there has been significant reflection on the contribution Frank Arok made to Australian football.

My previous article contained personal anecdotes of Frank and his influence on me as a young footballer.

However, before I came to know Frank as a coach and mentor, he was the newly appointed coach of the Australian national team (in this article, I will always refer to him as “Frank”, for that was how I knew him). The circumstances of his appointment speak to the great political manoeuvring of the day (and what’s changed, really?) although Frank himself was apart from the cloak and daggers, being both uninterested and unimpressed with the “bulldust” it represented to him.

Robert Lusetich’s fine book Frank Arok: My Beloved Socceroos gives a good account of Frank’s ascension to the role permanently in March of 1984, replacing Les Scheinflug, despite the latter boasting a successful coaching results sheet at both senior and Under-20 level.

1984 was a very different time in Australia’s footballing landscape. The National Soccer League (NSL) had expanded from a 16-team competition the previous season to an expanded 24-team, two-conference league. Four teams from Sydney and four from Melbourne were added to the respective conferences. The NSL was played in winter, along with all the various State Leagues.

Very few Australian players were playing in European competitions. The two most notable at the time were Craig Johnston and Tony Dorigo, and ironically, neither would ever represent Australia.

All this was a significant backdrop to Frank’s first major task as the Socceroos boss. Between the 26th of May and the 22nd of June, the Socceroos would play nine matches against five touring European teams. Juventus, Manchester United, Nottingham Forest, Glasgow Rangers and Iraklis visited these shores for a series of matches. It may seem puzzling to younger fans that the national team were playing against club sides, even those with the pedigree and history of the likes of Juventus and Manchester United.

But in the 1980s, attracting major football nations to play against Australia in full internationals was almost impossible. Australia’s footballing prowess was not recognised or highly regarded (the major exodus of young talent to European leagues – an indicator that Australia was producing high standard players – was still almost a decade from gathering steam) and so it was club sides that represented the main opposition for the national team in the era.

Even within Australia, it was assumed the drawcards were the big Euro clubs. The game in Sydney between Manchester United and Juventus was the most heavily promoted of the tour, with a leading commercial Sydney FM radio station running a competition called “The Sounds of Soccer”, where every time listeners heard the unmistakeable noise of a chanting crowd, they called into the station to try and win tickets to the game.

Despite the opposition being club rather than country, there was no doubting the quality of that opposition. Juventus were the reigning European and World club champions and boasted five Italian internationals who had won the World Cup two years earlier. Nottingham Forest was still an English powerhouse, managed by the mercurial Brian Clough, one of the most famous managers in football history. It was one of Frank’s regrets that Clough did not make the trip to Australia with his team.

Manchester United in the ’80s were not the same as the ’90s version that collected trophies like stamps, but they were still the best-supported team in the world with a reputation to uphold. Glasgow Rangers were, for their standards, in something of a lull at the time, having not won the Scottish championship since 1978, but were guided by Jock Wallace and boasted a host of Scottish internationals. Iraklis were the reigning Greek champions and one of the most attractive-playing sides in Continental Europe.

It was in preparing for this series, that Frank coined the term “Club Australia.” As the term suggests, he wanted to create a national team that would operate just like a club team (ironic, given all the opposition in the series were club teams). In Lusetich’s book, Frank said that he believed club teams were stronger than national selections because “national teams are just that: selections, who get together two to three times a year.”

“Club Australia” was designed to reinstate some elitism and pride in the green and gold, something that had diminished in an era when playing for the national team created as many difficulties for players – even domestic-based ones – as it did honours. And while Frank did not encourage foul play, he did not expect any of his club to be intimidated or physically overawed by any opposition.

Or to quote the great man, when asked why he did not seem to discipline some of his more physical players: “I don’t want choirboys, I want bastards.” 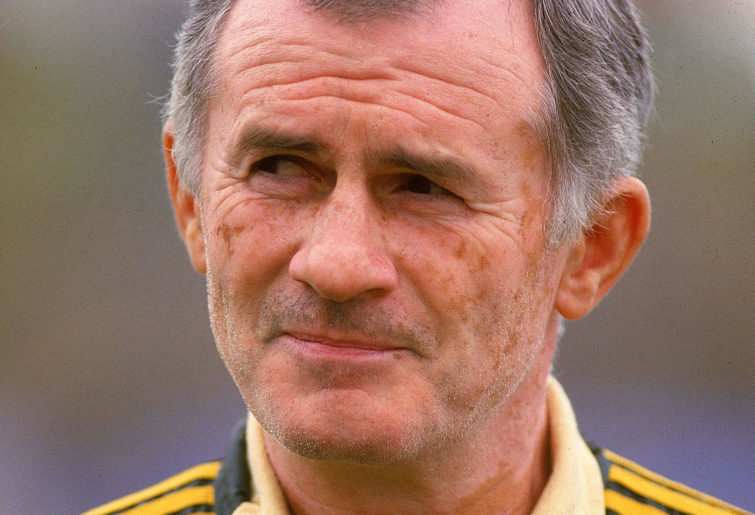 He needed bastards for what was to come – a series of distinctly “unfriendly” friendlies against the Turin giants. Three times in six days the two sides faced each other. The first match at the Melbourne Cricket Ground drew close to 40,000 fans, swelled by Melbourne’s large and passionate Italian community.

The Socceroos played above themselves in a 1-1 draw which rattled the Italian aristocrats, who with players of the pedigree of Claudio Gentile, Marco Tardelli and Antonio Cabrini, had players capable of holding up their end in an alley fight as well as a football match. Frank handed Marshal Soper a starting berth in the game and he was like a lightning rod in a thunderstorm. Soper was one of the most talented players of the era but he had a very big helping of the “bastard” that Frank desired.

Perhaps too much, as he was flattened by Juventus goalkeeper Steffano Taconi in the MCG match after upsetting one Italian too many. Cabrini repeated the dose a short time later; that both stayed on the pitch was more an act of charity from the referee Jack Johnston, who clearly did not want to ruin the game as a spectacle.

Juventus won 4-2 in Adelaide two days later in a game where Frank shed the Socceroos image as a defence-minded side by picking four strikers in John Kosmina, Soper, Frank Farina and David Mitchell. The team were undone by a sublime hat-trick from Polish maestro Zbigniew Boniek, but Frank had his eye firmly on Game three of this “series within a series”.

In what to date was his finest hour (or more accurately 90 minutes) as the national coach, Frank’s “Club Australia” beat Juventus 2-0 in Sydney. Given the reigning world club champions were being guided by Italian icon Giovanni Trappatoni, it was a triumph for the newly appointed Socceroos Svengali. It was a brutal match, where Soper again showed both sides of his football pedigree, getting stuck into his opponents with gusto, scoring a well-taken first-half goal, and then getting hacked by Cabrini before both Frank and referee Richard Lorenc stepped in.

Cabrini was red-carded, and Frank replaced Soper before halftime. Years later, former Sydney Olympic playing and coaching great Gary Phillips, a team-mate and coach of Soper, would say to me, “Frank saved Marshal’s career that day by replacing him. The Italians would have crippled him, that’s how badly he got under their skin.”

Frank’s Socceroos would go on to play 21 matches in 1984, all between May and December. Think about that for a moment – that’s an average of more than three games a month, for part-time players who also played a 30-game domestic season. Amazingly, only one of those matches was a full international, a November game against China in Beijing.

But it was that first series at home where the beginnings of Frank’s “Club Australia” vision was forged in the fire of those three Juventus games.

Wade’s time is up. Philippe must take the gloves