The project to restore the First Baptist (Colored) Church of West Baden Springs is almost complete.

WEST BADEN SPRINGS, Ind. — A historic church, nearly lost to time, is getting new life with a preservation project years in the making.

The small white chapel is one of the last structures representing Black history in West Baden Springs.

It’s been saved by volunteers, faith leaders and neighbors who are looking forward to reopening the Indiana landmark.

In a community known for bringing Hoosier treasures back from the brink of ruin, there’s another renewal underway with a rich history all its own.

Just across the highway from the restored West Baden Springs Hotel, at the corner of Elm and Sinclair Streets, volunteers are preserving African American heritage in Orange County.

“It’s called the First Baptist (Colored) Church of West Baden Springs, Indiana. This is the last structure and the only structure left of the black community from that era, from Jim Crow,” explained Elizabeth Mitchell, historian and member of the Second Baptist Church in Bloomington, who’s helping with the restoration. “It’s a beacon of light, was then and will be again!”

At the turn of the 20th century, in the midst of segregation, West Baden Hotel owner Lee Sinclair recruited Black employees for the famed resort. They were paid well, owned their own homes and helped deliver outstanding service at the luxury hotel. But outside of work, it was a dark time in our history. Black families were forced to have separate restaurants, hotels and churches and West Baden didn’t have a place of worship.

At the time, West Baden Springs and French Lick were extremely competitive.

So he sold his workforce this land in West Baden Springs for a dollar to create a spiritual sanctuary.

“Lee Sinclair knew how important faith was to the Black community,” Mitchell explained. “He wanted to make sure his workers – bellhops, maids, had a place to worship and so thus First Baptist Colored Church was built.”

It became a thriving center for religion and culture and was known for helping people in need, regardless of race.

But when the hotel declined, so did the congregation, eventually dwindling to just one remaining member.

The church sat dormant for decades and was named one of Indiana’s most-endangered landmarks.

That’s when a group of faith leaders from Bloomington decided to save it.

The Southeastern District Association of the Indiana Missionary Baptist State Convention bought the church from the town council for a dollar, promising to return it to its former glory.

“It wasn’t just outsiders that saw the need, the community saw the need and they welcomed us here and they still do,” Mitchell said.

But the quarter-million dollar restoration was daunting.

“The siding was falling apart. The animals, the dust, you could see the rafters where they had a fire and it was burnt,” said Dr. Bruce Rose, Pastor of Second Baptist Church in Bloomington and chairman of the board for the West Baden Church Renewal Project. “It was just really like, ‘How in the world are we gonna get this back?'”

The restoration of the First Baptist (Colored) Church of West Baden Springs, Indiana 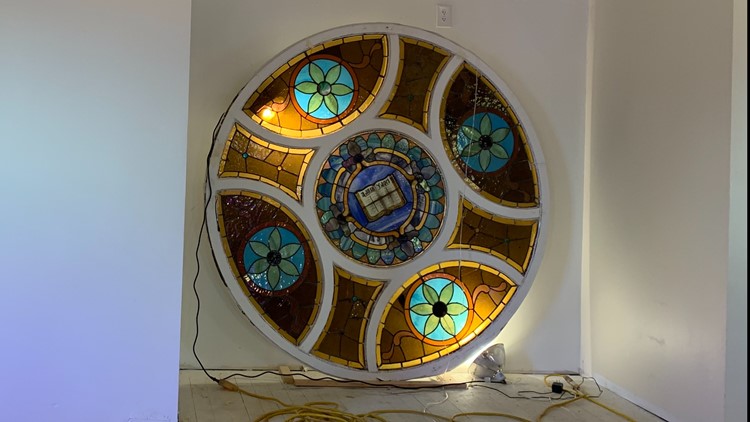 For the past four years they’ve been stripping the building down, straightening bowed walls, rebuilding floors, doors and windows.

“And they (volunteers) faithfully came twice a week every Wednesday and Friday on their own time, on their own dime to restore this church,” Mitchell said. “I don’t think we had anybody say ‘no’ or ‘I can’t’. There’s times we’d come here and there’s money stuck in the door. Today when we came, there’s a note in the door, ‘I will come and help paint ‘ and this person was from out of town.”

Now, after four years and a pandemic delay, the project is 95 percent complete.

“It’s probably been eight months or longer since we did any work but coming in today, just really, I just shake my head in amazement and thank God for the progress that we’ve been able to make and look forward to getting it completed because it’s been a long time coming,” Pastor Rose said.

Mitchell has also tracked down descendants of the original congregation: educators, musicians and business owners from across the country.

They’ve been invited to the rededication, when the church holds its first service, to celebrate their ancestors’ legacy.

“They’ve never been here before. They knew their mother was born here and their grandparents worked here,” Mitchell said. “I have been here and sat here by myself and just thought about the people who were here that are no longer alive and when you think about that, you kind of get emotional of what they went through. So you think of all the struggles that they went through and out of all their struggles, they found success.”

Just as volunteers have done now, reviving an Indiana landmark.

“It’s been a labor of love,” Pastor Rose said. “I can’t wait to turn the keys over and say ‘look what we were able to accomplish. Praise the Lord!”

You can follow the restoration project on the SBCBloomington.org or on Facebook.com/WBCRP.

Malaysian Christians can use ‘Allah’ in publications:…