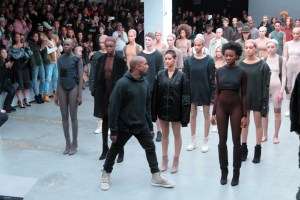 YEEZY, Kanye West’s apparel brand, is reportedly suing a summer intern for violating the terms of a nondisclosure agreement. The company filed a complaint against the intern on Friday (Jan. 15) in hopes of enacting a $500,000 liquidated damages clause.

The Hollywood Reporter was the first to break the news of the complaint, which was filed in Los Angeles County Superior Court by YEEZY officials. Ryan Inwards worked as an intern for the brand and uploaded images of the wares that violated the NDA. As THR added in their reporting, the $500,000 clause was put in place to hamper any attempts at leaks or sharing images of YEEZY’s intellectual property.

It appears that the images Inwards leaked were still available online as of this weekend, although an Instagram account assumed to belong to Inwards is completely free of posts. YEEZY is suing Inwards for breach of contract and conversion, including seeking the $500,000 in liquidated damages along with punitive damages.

The latter request in damages comes as YEEZY believes had malicious intent in leaking the images. An injunction is also potentially on the horizon with YEEZY hoping that Inwards will be ordered to turn over any images he obtained during his time with the company and banned from further sharing images related to the company from this point ongoing.

Last month, federal authorities made a $32 million bust which included forged YEEZY and Jordan Brand sneakers, fake Viagara pills, knockoff designer wear, and more. The seizure of the fake goods occurred in Los Angles and was carried out by officers from the U.S. Customs and Border Protection outfit.

Can Live Album Series and Live in Stuttgart 1975 Announced

All Eyez on Me Captured 2Pac’s Last Moments of Peace