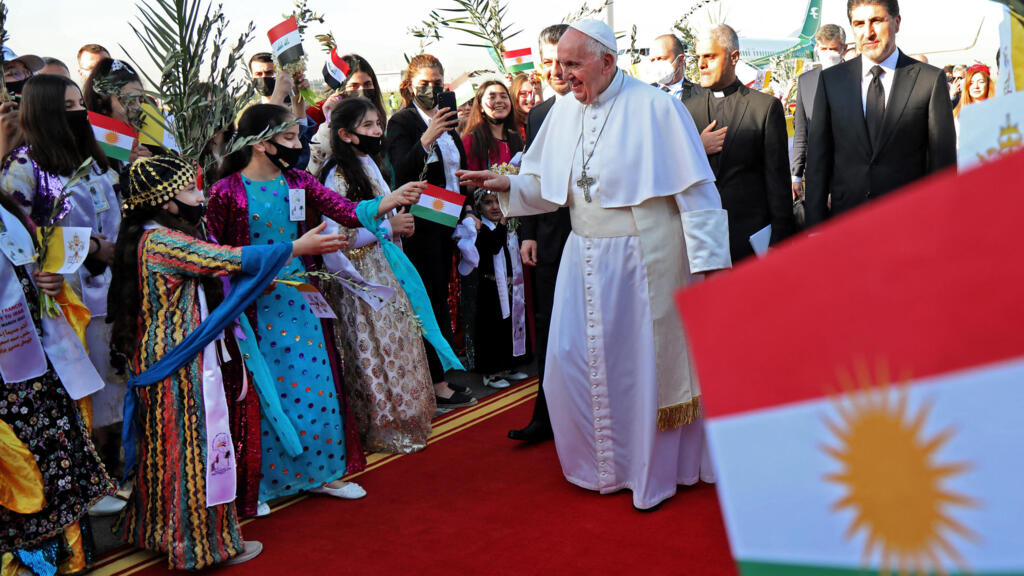 Pope Francis, on his historic Iraq tour, visits on Sunday Christian communities that endured the brutality of the Islamic State group until the jihadists’ “caliphate” was defeated three years ago.

The 84-year-old, travelling under tight security, will lead a prayer “for the victims of the war” in Mosul, an ancient crossroads whose centre was reduced to rubble by fierce fighting to oust the Islamic State group.

“We believers cannot be silent when terrorism abuses religion,” Francis said at an interfaith service Saturday, one of the many stops on the first-ever papal visit to the war-scarred country.

Pope Francis‘ trip to Iraq as a “pilgrim of peace” aims to reassure the country’s ancient, but dwindling, Christian community and to expand his dialogue with other religions.

The leader of the world’s 1.3 billion Catholics on Saturday met Iraq’s top Shiite Muslim cleric, the reclusive Grand Ayatollah Ali Sistani, who agreed that Iraq’s Christians should be able to live in “peace”.

“We all hope that this visit will be a good omen for the Iraqi people,” Adnane Youssef, a Christian from northern Iraq, told AFP. “We hope that it will lead to better days.”

The Christian community of Iraq, a Muslim-majority country of 40 million, has shrunk from 1.5 million before the 2003 US-led invasion that ousted Saddam Hussein to only 400,000 now, about one percent of the population.

“This very important visit will boost our morale after years of difficulties, problems and wars,” said an Iraqi Christian leader, Father George Jahoula.

Back in 2014, when IS militants swept across one third of Iraq, Pope Francis had said he was ready to come to meet the displaced and other victims of war.

Seven years later, after a stop early Sunday in the Kurdish north of Iraq, he will see for himself the devastated Old City of Mosul and efforts to rebuild it.

Pope Francis will also visit Qaraqosh, further east in the Nineveh Plain, which is one of Iraq’s oldest Christian towns.

It was largely destroyed in 2014 when IS rampaged through the area, but its residents have trickled back since 2017 and slowly worked at rebuilding their hometown.

To honour the pope, local artisans have woven a two-metre (6.5-foot) prayer shawl, or stole, with the “Our Father” and “Hail Mary” prayers carefully hand-stitched in golden thread in Syriac, a dialect of the language spoken by Jesus Christ that is still used in Qaraqosh.

Security will be extra-tight in the north of Iraq, where state forces are still hunting IS remnants and sleeper cells.

Many thousands of troops and police have been deployed as the pope has criss-crossed the country, taking planes, helicopters and armoured convoys to cover more than 1,400 kilometres (870 miles) in-country.

The other major challenge is the Covid-19 pandemic, as Iraq has recently been in the grip of a second wave, with a record of more than 5,000 cases in a day.

Iraqi authorities have imposed lockdown measures to control crowds, but thousands of faithful are expected to flock to a stadium later Sunday in the northern city of Arbil to hear the pope.

Arbil, the capital of Iraq’s oil-rich northern Kurdish region, has been a relative haven of stability and a place of refuge for many Christians who fled IS.

Several thousand seats in the Franso Hariri stadium will be left empty to avoid creating a super-spreader event when Iraqis come to hear the Catholic leader, known here as “Baba al-Vatican”, deliver the holy mass.

Who will win the presidency? Election Prediction