“I shall bring queens to Zamunda!” Amazon debuted a short Super Bowl TV spot for Coming 2 America, the long-awaited sequel to the beloved comedy classic Coming to America from 1988. We featured the full-length official trailer last week, and this new TV spot adds in a few bits of new footage.. Akeem learns he has a long-lost son in the United States and must return to America to meet the unlikely heir to the throne of Zamunda. This “hilarious adventure” has them traversing the globe from their great African nation to the borough of Queens. Eddie Murphy and Arsenio Hall both return as Akeem and Semmi again, joined by Jermaine Fowler, Leslie Jones, Tracy Morgan, KiKi Layne, Shari Headley, with Wesley Snipes and James Earl Jones, as well as John Amos, Teyana Taylor, Vanessa Bell Calloway, Nomzamo Mbatha, Paul Bates, and Bella Murphy. This just doesn’t look as good as it should, but I still have hope. 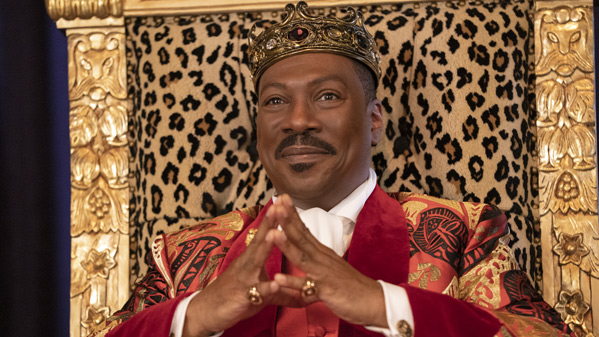 You can watch the teaser trailer for Brewer’s Coming 2 America here, or the full-length trailer here.

“A sequel is in the heir.” Set in the lush and royal country of Zamunda, newly-crowned King Akeem (Eddie Murphy) and his trusted confidante Semmi (Arsenio Hall) embark on an all-new hilarious adventure that has them traversing the globe from their great African nation back to the borough of Queens, New York – where it all began. Coming 2 America is directed by the acclaimed American filmmaker Craig Brewer, director of the films The Poor & Hungry, Hustle & Flow, Black Snake Moan, Footloose, and Dolemite Is My Name previously. The screenplay is written by Kenya Barris and Barry W. Blaustein & David Sheffield, from a story by Barry W. Blaustein & David Sheffield and Justin Kanew. Based on characters created by Eddie Murphy. Produced by Kevin Misher and Eddie Murphy. Amazon will release Brewer’s Coming 2 America streaming exclusively starting on March 5th, 2021 next month. Look good? Who’s planning to watch this?