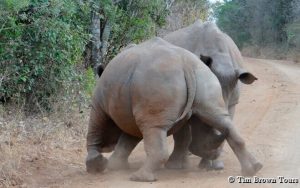 In the African bush there indeed ~ the seen ~ and often unseen animal interactions.  One of the animal interactions we don’t see often is Rhino fighting each other for dominance. Either for the right to hold territory and/or to mate with females.

These interactions between these prehistoric creatures with the thickest skin (2.5 cm) of any land mammal, can still lead to death. Watching these interactions is a great privilege. And a reality which we often forget even takes place with some of our endangered species.

Rhino Fighting amounts young males:- A young male Rhino will begin play fighting, basically wrestling with other calves or siblings. This teaches them the skills they require in order to challenge a large territorial male in the future. It is usually by the age of 12 years that males will attempt to establish a territory for themselves. This can lead to savage fights until one gives up or is killed.

Territorial male Rhino will mark their territory through scent, in several ways:

When another male Rhino (or female for that matter) walk through a territorial male’s territory, they will pick up the scent. Most importantly, is the fact that Rhino have a Vomeronasal gland or Jacobson’s organ on the upper pallet of their mouths. This is a tool used to inhale the scent from the territorial male’s markings. The gland will then translate crucial safety information to the Rhino.

If a male Rhino walks through another male’s territory:-

My Priviledge and Honour

My job as a Tour guide and operator is a privilege. And to have the honour of sharing these moments with our guests from all over the world is something quite special. I therefore consider myself to be representing not only the animals and their plight but my country as well. And both of those help create a huge respect for nature and these animal interactions.

I hope you enjoyed this blog post and find the information helpful and the videos educational.

See some of our TripAdvisor reviews below:-

We had a fantastic trip. Our guide was very knowledgeable and his experience showed. We really enjoyed the stop at the Cat Rehabilitation Centre on the way to the reserve. It broke up the long drive and was very informative and gave the opportunity to see some of the smaller cats up close.
The Safari itself was amazing. Nature was very kind to us and we saw an abundance of animals including Elephants, Rhino, Giraffe, Zebra, Buffalo and Warthog to name but a few. On our final morning we were lucky to see 5 Lions at close as quarters. Very happy to see 4 of the big 5.

The elusive Leopard is a tough ask in this park and spotting one is pure luck and timing. There are no guarantees with nature. The accommodation at Hilltop was brilliant and the food good quality.
On the way back we did the river tour in St Lucia to see the Hippo and Crocodiles.
Can’t recommend Tim Brown Tours enough. Fantastic from start to finish.

From the moment he picked us up, Tim was completely dedicated to making sure we had the best safari experience possible. He shared an abundance of knowledge about Durban, Hluhluwe, the animals, and South Africa in general. Tim welcomed every question with a smile and I can truly say we learned so much from him.

After arriving on the reserve, we went right to searching for animals even though it wasn’t on the schedule and delayed his lunch hour- in fact, it was even Tim’s idea. He even went out of his way to make sure we saw giraffe as close as possible before we left, showing his vast knowledge of the reserve and the animals within it. I could not have asked for a better time on Safari- Tim Brown Tours is a must, if I ever get the chance to return to South Africa, there is no doubt I will be going on another Safari with this company.

My husband and I did a safari pre cruise, out of Durban. We saw that Tim Brown Tours got excellent reviews on Trip Advisor, so we emailed Tim Brown Tours for information. The response was the next day…and our questions were answered to our satisfaction. We were very impressed with the quick turnaround and with Taryn’s friendly and personal interactions each time we contacted her. Never having been to South Africa, we had many questions about the safari and overnight accomodations. We stayed at the Hilltop which was more than adequate.

Tim met us at 7am at the Hilton in Durban the morning of our safari. On our drive to our first stop..Cheetah reserve Tim explained the history and culture of Durban and South Africa in general and pointed out agriculture and industry along the way.
After visiting the Cheetah reserve and getting up close to these amazing animals we were on our way to Hilltop. In the game reserve on our way to Hilltop we saw rhinos and elephants.

After lunch, Tim took us out for an evening safari. Early morning and late afternoon safaris continued for our 3 day, 2 night stay. Tim knew where to go to watch the animals..he was patient and never rushed us. We observed elephants, white rhinos, giraffes, cape buffalos, lions, and many smaller animals ie warthogs, baboons,vervet monkeys, antlope etc.

Tim’s knowledge of these animals and habits was in depth and complete. His knowledge extends to birds and plants. He loves his work and his passion is infectious. We highly recommend his tours without reservation. You get far more than you’d expect. In a world of uncertainty his tours are an exceptional value.

Drop us an email or have a look through our website and see if there is a Durban Safari that suits your needs. If not we can always customise a tour for you encompassing your interests.

Tim Brown Tours – with numerous awards and a long history of great reviews on TripAdvisor, can help you. So look at our alternatives to visiting the Kruger National Park. And join us for your South African Safari experience! We look forward to hosting you in the near future! Book Now and get an experience of a lifetime.

You can also find us at  Tourist Guides and Trip Advisor

Interested in Nature and Travel in South Africa? Then head on over to our Tours and book your very own Safari today – You know you want to![/vc_column_text][/vc_column][/vc_row][vc_row 0=””][vc_column width=”1/3″][vc_toggle title=”One Day Tours and Safaris”]Battlefields of Kwa-Zulu Natal

Seven African nations Nigerians can travel to by road