(C) 2020 by Rych McCain, All Rights Reserved. No part of this column may
be reprinted, re-posted or duplicated without written permission from
Rych McCain Media/Syndication. Violation is subject to applicable laws

This blog is ranked #9 in the Top 20 Hollywood Blogs from the massive worldwide data base of FeedSpot.com 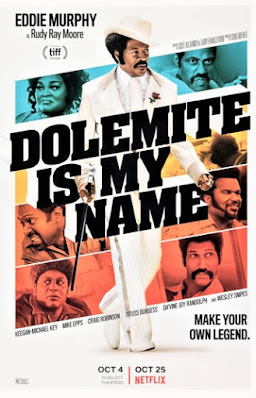 If you were one of the millions of worldwide movie goers who gawked, marveled and were awed by those incredible Afrikan outfits in the box office record setting movie “Black Panther;” you have witnessed the gifted and incredible talents of the film’s costume designer Ruth E. Carter who won the 2019 “Best Costume Design” Oscar for the film. It was one of the first Oscars for the Marvel Cinematic Universe and a first for an Afrikan American female.

Carter, an alumni of HBCU Hampton University got her start on campus designing for school plays then went on to work with Spike Lee and his first film “School Daze” and other Spike Lee Joints. These then led to more movies such as “Amistad,” “The Butler;” etc., and even “Seinfeld” and more TV show work. As expected, Carter did splendid work for the Netflix Big Screen movie “My Name Is Dolemite.” basted on the real life story of the late, great comedian, actor, film maker Rudy Ray Moore. Carter recreated the look and feel that Moore sported in the 60’s/70’s while blazing the trail for XXX rated albums and live standup comedy club routines. 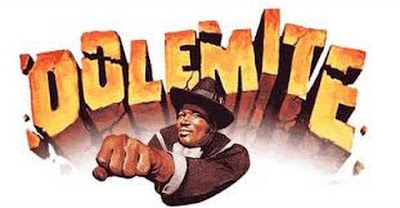 When he first came out, you had to specifically ask for a Rudy Ray Moore comedy album from the record store clerk because they were not on public display in the record bins and came wrapped in a brown paper bag. You listened to them in private with only a select group of friends and you kept them hidden from the children and prude, self-righteous, hypocrite church folks who stopped by for a visit. Eddie Murphy stars as Moore and is supported by an all-star cast.

A special press screening was held for “My Name Is Dolemite” at the Landmark Theater in West Los Angeles and afterward a reception with food and drink was held in the annex where several scenes from the movie had been recreated and set up and costumes that Carter designed were on display on mannequins. 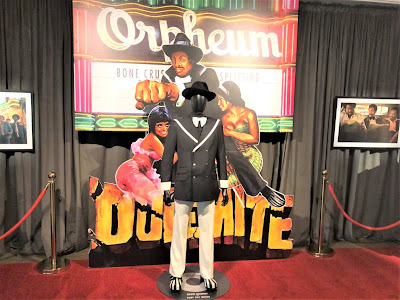 Mannequins With Costumes On Display 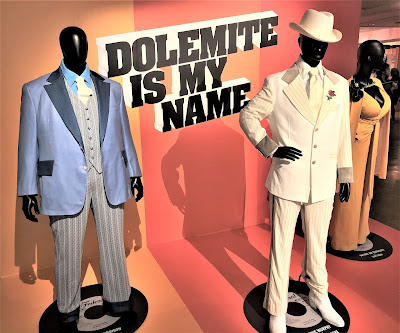 When asked about that whirlwind Oscar year of 2019 Carter said, “After that first trailer of “Black Panther” everything changed. All of a sudden, I was asked question after question and I gained 5,000 twitter followers. I got a sense that this thing was going to be really big after that. I’m really appreciative to everybody who loved the film. It opened up the door to my other work for people to review again saying I didn’t know she did this or she did that.”

Getting back to Dolemite, Carter lights up saying, “Rudy Ray Moore curated the look for Dolemite and the more research I did, I said wow, look at the shoes. The shoes are incredible. I really got into it.” Carter designed a platform shoe out of a tennis shoe so Eddie Murphy could be comfortable wearing them for long periods of time on set. Everything in the movie was hand made from scratch.

Carter has launched her own clothing line through H&M retail outlets called “Ruthless Collection.” She also plans to release a book in conjunction with the release of “Black Panther 2.”