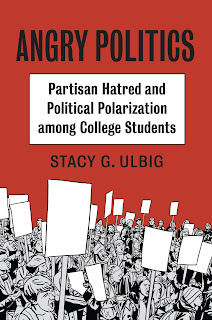 About the book, from the publisher:

At a time of political tribalism and ideological purity tests, when surveys tell us that pluralities of the people in each party deem the opposition “downright evil,” it can be hard to remember that cross-party hatred isn’t an inherent feature of partisan politics. But, as this book reminds us, a backward glance—or a quick survey of so many retiring members of Congress—tells us that even in the past decade partisan rancor has grown exponentially. In Angry Politics, Stacy G. Ulbig asks why. Even more to the point, she traces the trend to the place where it all might begin—the college campus, among the youngest segment of the electorate.

A distinguished researcher and scholar of political psychology and public opinion, Ulbig gets right to the heart of the problem—the early manifestation of the incivility pervading contemporary US politics. With an emphasis on undergraduates at four-year universities, she gauges the intensity and effects of partisan animosities on campus, examines the significance of media consumption in forming political attitudes, and considers the possibility that partisan hostility can operate like racial and ethnic animosities in fomenting intolerance for other groups. During the college years, political attitudes are most likely to be mutable; so, as Angry Politics explores the increasing combativeness on campus, it also considers the possibility of forestalling partisan hatred before attitudes harden. Finally, Ulbig finds hope in the very conditions that make college a breeding ground for political ill will. Embracing their responsibility for developing responsible citizens capable of productive political engagement, colleges and universities may well be able to inject more reason, and thus more civility, into future partisan debate.

Learn more about Angry Politics at the University Press of Kansas website.

There should be no politics over COVID vaccine: Amit Shah