Only condoms that are manufactured for STD prevention are considered suitable to prevention in the FDA’s eyes. Natural condoms, like those made of lambskin, are not safe for preventing STDs; their pores are too small to allow sperm cells to pass through, but viruses and bacteria can permeate the pores and spread. Learn more about the different types of condoms. 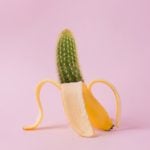 STDs that can be contracted while using a condom include:

Get tested to get peace of mind today.

Menstrual Cups? Here’s What You Need To Know

Spicing Up Your Sex Life