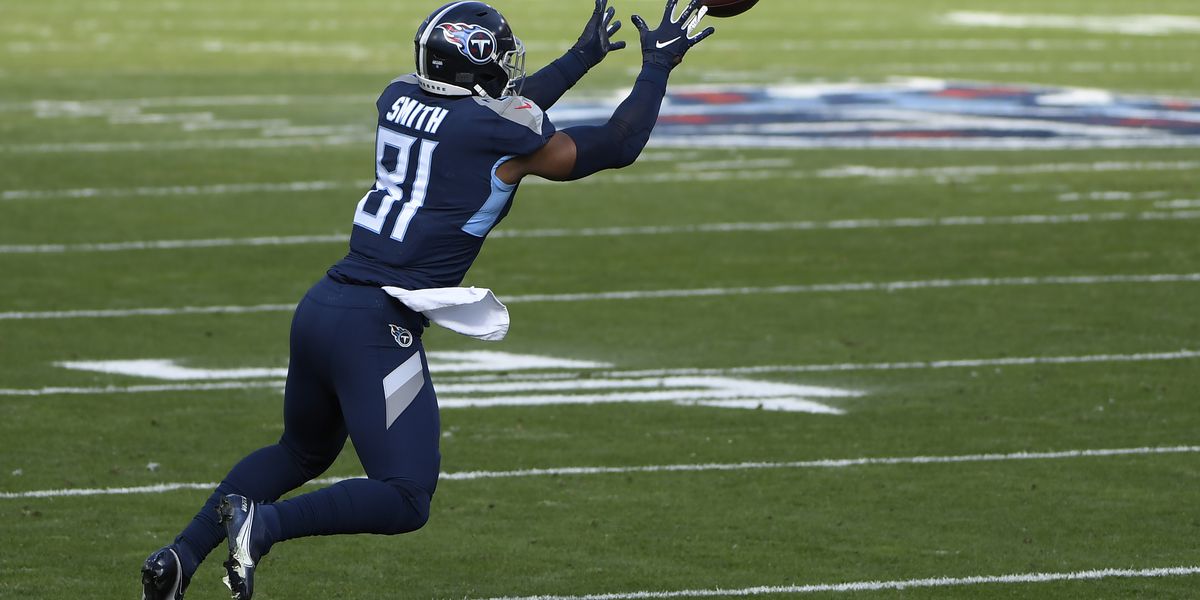 Over the next few weeks, we’ll be taking a closer look at the Titans’ free agent class. One by one, we’ll provide some basic details on the player before making an argument for both sides — why the Titans should, or shouldn’t re-sign that player. We’ll also offer our final verdict and a prediction to go along with it.

Today, we are looking at one of the team’s most important players on offense.

Why the Titans should keep Smith: Jon Robinson made one of his best drafting decisions ever when he drafted Jonnu Smith with the 100th overall pick in the 2017 NFL Draft. Smith began his career as the team’s No. 2 TE behind the great Delanie Walker. Smith quickly showcased his ability despite playing behind what was at the time one of the game’s best TE’s. The writing was on the wall for Walker the day Smith was drafted, and although it took a couple of years, Smith eventually stepped into the No. 1 role.

Since doing so, Smith has really flourished in this offense. He has the type of skill-set that fits so well into this team’s offensive identity. Smith can put his hand in the dirt, set up as an in-line blocker and make a big impact in the run game, or he can stretch the field in the passing game with his dynamic route running ability.

It’s actually shocking how much better Smith has gotten as a blocker. He wasn’t very good at it in college. He’s clearly worked very hard on this area of his game. It’s a testament to his work ethic.

Smith has even lined up in an H-back role and taken a couple of carries. The team also loves to throw him a screen pass near the end zone, where his physicality after the catch makes him tough to stop near the goal line.

Smith is still in the prime of his career at just 25 years old. Losing him would be a big blow to this offense, in both the running game and the passing game.

Why the Titans should let Smith walk: Smith wasn’t very productive down the stretch of the 2020 campaign. Blame it on whatever, but Ryan Tannehill and the offense just didn’t find a lot of targets for him as the year went by.

As long as this team has Tannehill, Derrick Henry and A.J. Brown on the roster, everybody else will remain an afterthought. Paying Smith the type of money it’s going to require to keep him while not peppering him with targets in the passing game seems a bit counterproductive.

Final verdict: I’m not going to lie to you, writing that “why they should let Smith walk” portion was difficult for me because I absolutely believe that the Titans need to keep him.

His dip in production near the end of last season can easily be accounted to the loss of Taylor Lewan. After their star left tackle went down for the season, the Titans asked Smith to block a lot more. He was also asked to at least chip a defender on a pretty regular basis which led to delayed releases as a route runner. If you look at the numbers, you will see that Smith’s dip in production was directly related to Lewan’s injury.

I just think that Smith is too important to this offense to let him walk. What he does in both the passing game and the running game is extremely valuable to the design and success of this offense.

Prediction: Just as they did last offseason with Henry, the Titans use the very reasonable franchise tag on Smith ($8 M) to buy them time to work out a long-term deal. Smith will stay in Tennessee.

What are your thoughts? Should the Titans re-sign Smith? Leave your opinion in the comments.