Have you ever thought much about toilets in aeroplanes? They aren’t really that interesting, they all look pretty similar and they can be used by anyone… anyone, of any gender and any anatomy. No one really blinks an eye at gender neutral toilets in the air so why the fuss on land, especially in schools.

There is a need to create safe bathroom spaces for everyone at schools, kids want it! It’s not just the trans and non-binary students in need of more safety, it’s all students.

School toilets can be a site for cruel jokes, lack of privacy and embarrassment for any students.

For instance, my three children hate their school toilets:

Accessing public bathrooms and toilets can be an especially difficult experience for trans and non-binary people. Gender neutral school toilet options are not common and using the toilets that align with their gender is not always a safe option.

There are numerous additional safety issues for trans and non-binary students regarding toilets:

Just a word on safety in toilets – parents often worry about ‘stranger danger’ in public toilets, but then I remind them that much more than 90% of the time sexual abuse is carried out by someone known to the child and mostly occurs in private settings.

Another myth, that trans women in toilets are a risk to children is ridiculous, the highest sexual abuse risk to children is from heterosexual adult cisgender males in a private setting. Research shows that trans women are not a threat within female toilets. There is not a lot of research into trans women attacking cis women or children for that matter in public bathrooms, as the research shows there is no concrete evidence of trans women attacking cis women in these settings, these attacks appear to simply not be happening. However, there is a small number of reported cases of bathroom attacks that involve perpetrators of violence falsely claiming to be transgender or disguise themselves as women to gain access to the female bathrooms. Research also shows that that is often trans women that are the victims of violence, specifically within bathroom spaces. Common forms of violence include verbal and physical abuse, as well as being physically denied access to bathrooms.

“Barney Frank, the former liberal Democratic Senator from Massachusetts, frankly stated, “Transgendered people want a law that mandates a person with a penis be allowed to shower with Women” (Currah 2008, 333)…

commit sexual assault. This is the “man in a dress” stereotype of transgender women.

against girls and women. But there have not been any reported incidents whereby a

room. On the contrary, there have been many incidents of transgender women being

assaulted by cisgender men in public restrooms (Brinker and Maza 2014). Yet the

ResearchGate: Why the “transgender” bathroom controversy should make us rethink sex-segregated public bathrooms

What can we do?

One obvious example is to put in longer doors and taller walls with adequate locks! Longer doors do not only benefit trans and non-binary children, it benefits everyone.

Here are some photos of a school bathroom I saw recently that had longer doors and higher walls which impacts privacy and therefore safety. The basins were in the centre of the room facing out on two sides with cubicles all around every wall.  No hidden corridors to loiter. The accepted school culture is to ‘use the toilet and leave’, no hanging around or socialising.   The children at this school were given a choice of what their funding opportunity should be spent on and they chose new toilets above other things such as play equipment. 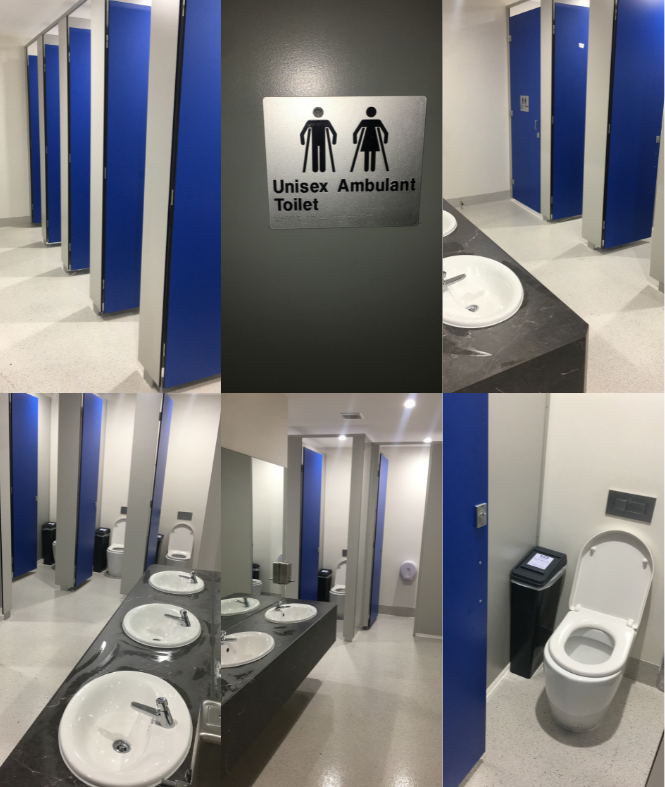 Well designed toilets are a simple way to make students feel safe at school. Everyone has the right to privacy and safety. The solution is simpler than most think.

In public spaces such as shopping centres, some of the cubicle options might have washbasins and a mirror – for complete privacy for those who feel unsafe so avoid having a space where people mingle. Much thought and a new design is needed but surely it is time to rethink the designs of the past.

Here are some key points from Trans @ School: A guide for schools, educators, and families of trans and gender diverse children and young people:

Let’s use an example from the resource Trans @ School: A guide for schools, educators, and families of trans and gender diverse children and young people from the Queensland Human Right Commission to look at how to support a transitioning student (page 8):

“Holly’s parents are enrolling her in Year 2 at a new primary school. The school is keen to ensure Holly feels safe and supported at school. At first they suggest that Holly uses a designated teacher toilet. Holly’s parents explain that Holly is unhappy with this as she wants to use the same toilets as her friends. The school explains they have an issue at present with girls and boys running into bathrooms and popping heads under doors as a joke. Holly’s parents and the school discuss the best option to ensure that Holly isn’t accidentally “outed” as trans during one of these games. Together Holly’s parents and the school decide that the best solution is to install longer doors. After the new longer doors are installed, Holly starts using the girls toilets along with her friends. The longer doors have the added benefit of ensuring the privacy of all students”

This example shows the simple yet powerful effect that longer doors can have. Trans and non-binary students shouldn’t have to feel segregated from their peers, or “not normal” having to use staff toilets. They want to fit it. They deserve to feel like their peers, and all students deserve to feel safe. Some solutions like longer doors, benefit everyone not just trans and non-binary students. However, it is always good to ensure and prioritise the safety and inclusivity of the LGBTQIA+ community.

What can we learn from aeroplane toilets and improve on from them? Labels or a lack of labels is important! 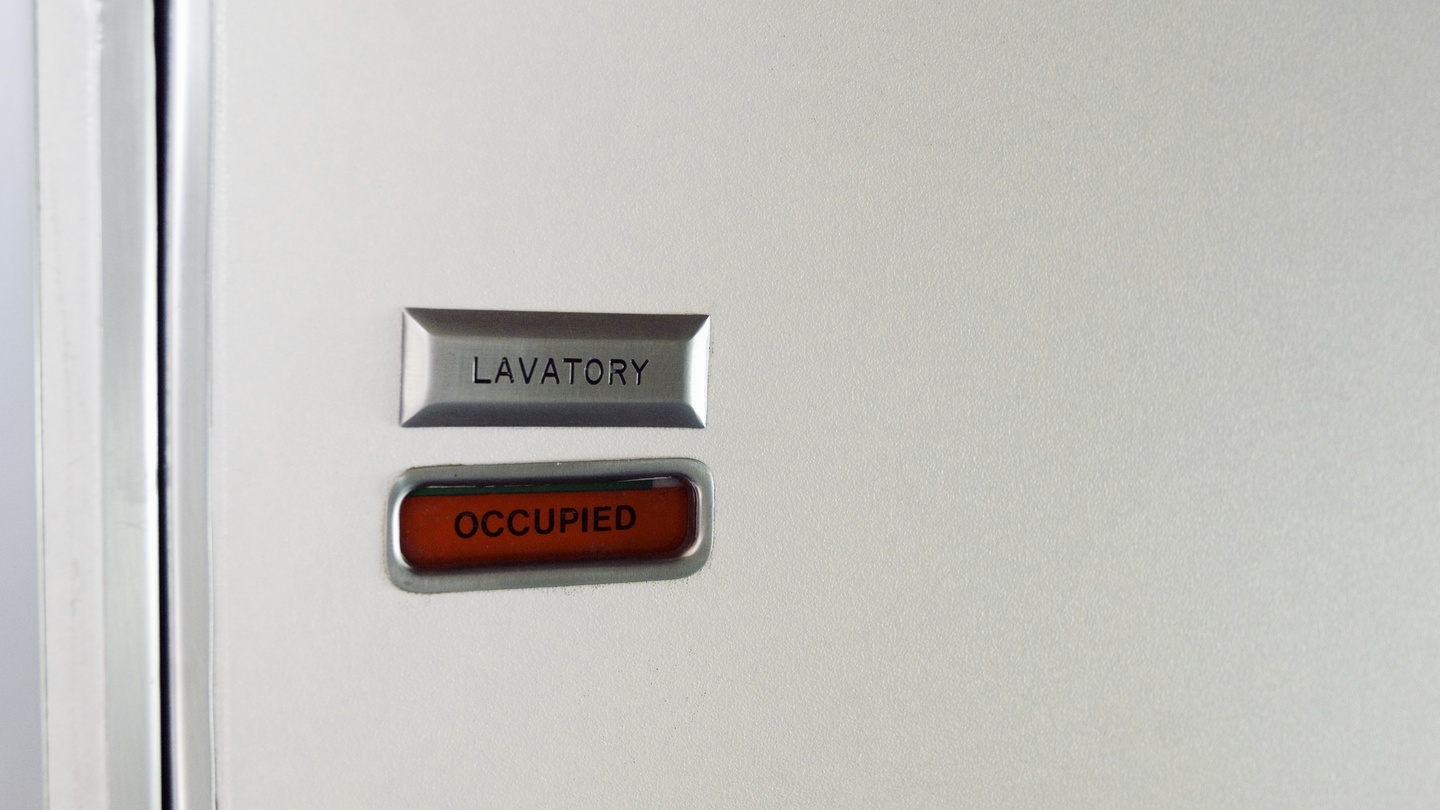 Society is obsessed with labels!

Why not just use an image of a toilet and a letter for F or M? Planes often use gendered images of physical “male” and physical “female” bodies. The “female” symbol is depicted in a dress and women aren’t always in dresses. These symbols are always inaccurate! 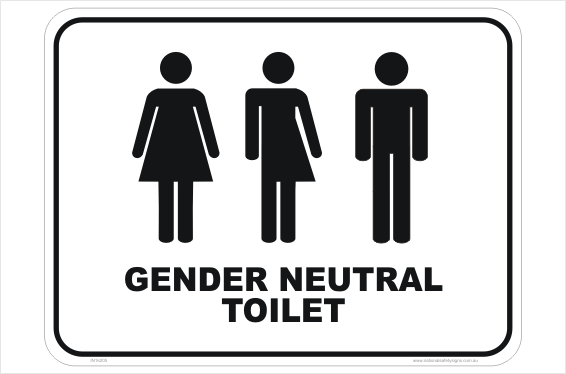 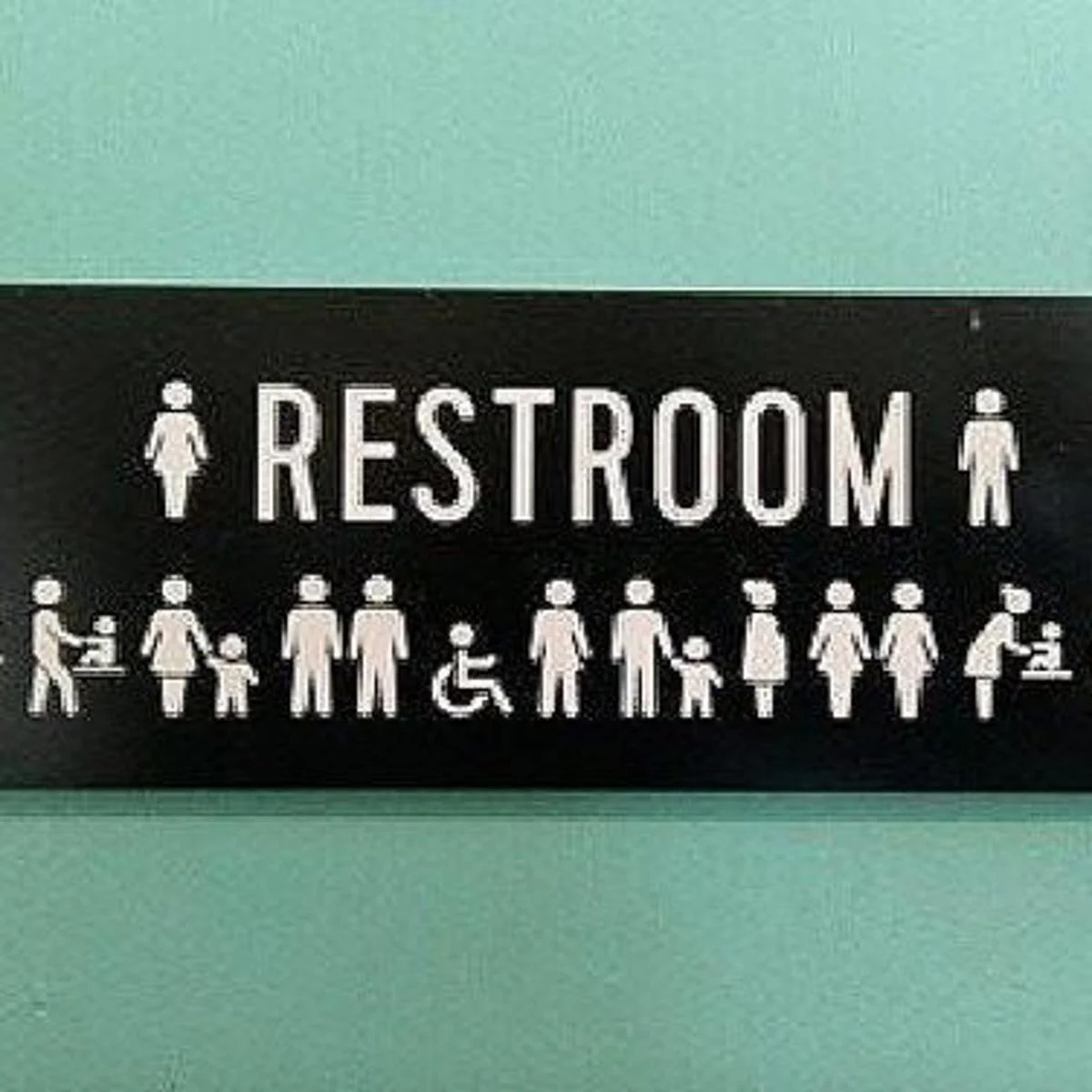 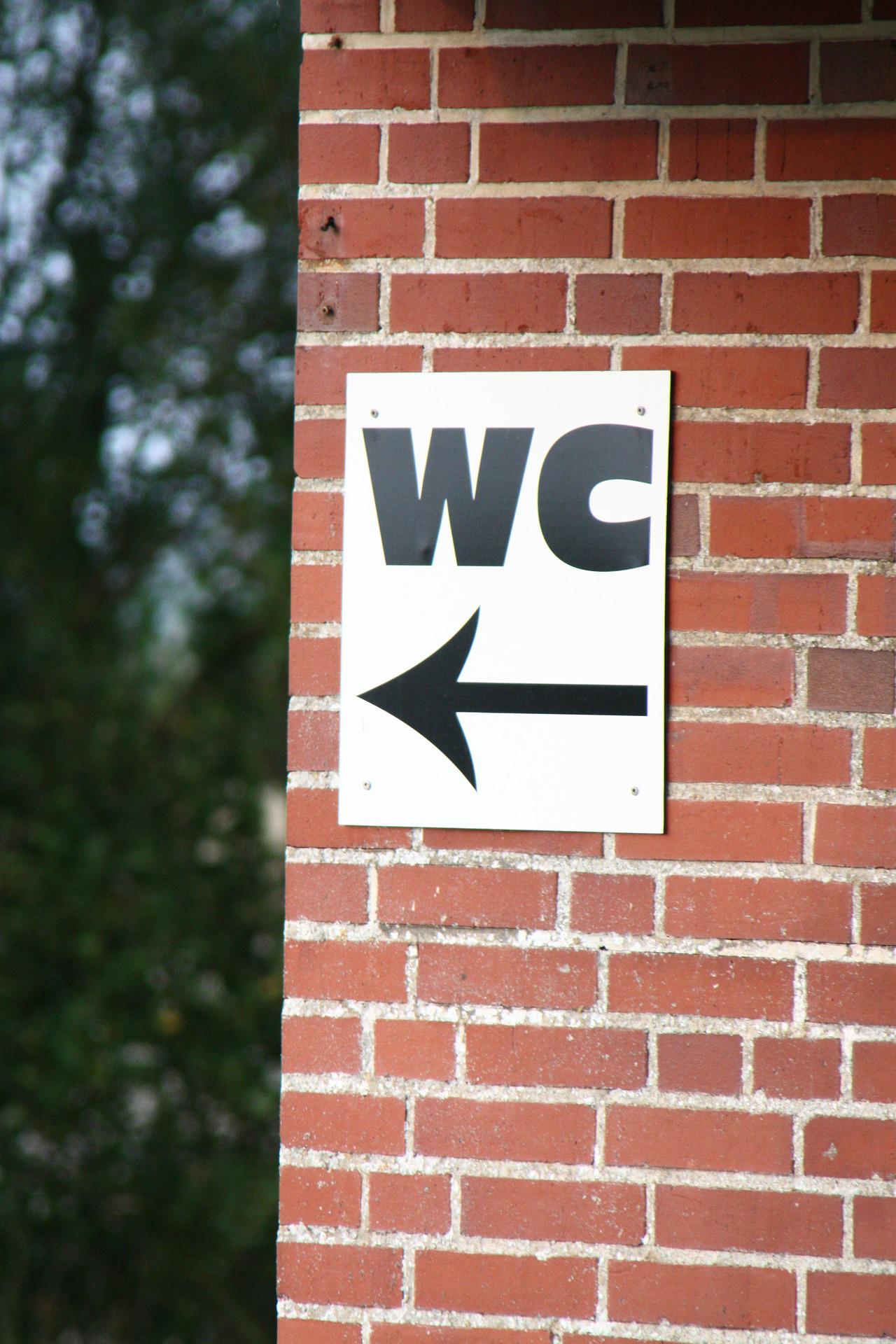 There are universal symbols used that go beyond language barriers. For example, if we go to an airport in a country where we may not speak the language, we can see the symbol “WC” and know that it is referring to a toilet. There are also commonly used phrasing for toilets such as unisex or gender neutral, which are already normalised in society.

We don’t even need to specify that toilets are gender neutral or are for all genders, we could simply use the word “toilet” or “lavatory” to label and describe toilets because that’s what they are. 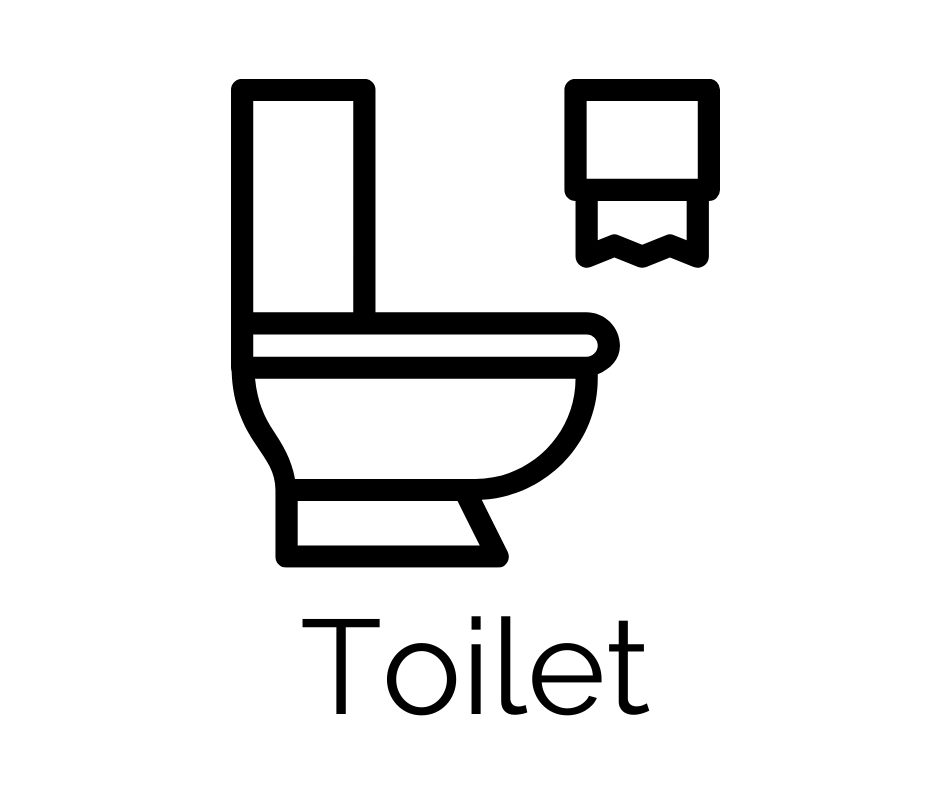 Some establishments have introduced distinguished between toilets as toilets with urinals and toilets without urinals. But we might not be ready to remove all labels just yet.

It’s important to think about how seemingly small things like creating gender neutral bathrooms and longer doors can have such a massive impact. Small changes can go a long way in making a space more private and safe. Let’s start having these conversations with all young women and hear what they would like and what makes them feel safe. Just because there isn’t a big precedent for this or set guidelines that doesn’t mean we shouldn’t be making these changes. In fact, it is more reason to make changes, imagine how long kids have avoided going to the toilet at school!

Whether we are in a school or in an aeroplane, everyone should have a safe and private toilet/bathroom option. Let’s start to think about how we make safe spaces not only for trans and non-binary students but for all students. We would all like longer doors!

Pronoun quiz by Minus18

Other Talking The Talk blogs and podcasts on similar topics:

Talking The Talk Healthy Conversations Episode 17: Ebook in audio – What does ‘Sex’ even mean?

Talking The Talk Healthy Conversations Episode 10: What is LGBTIQA+ and how do I explain it to my kids?

Talking The Talk Healthy Conversations Episode 4: What is the difference between sex & sexuality?