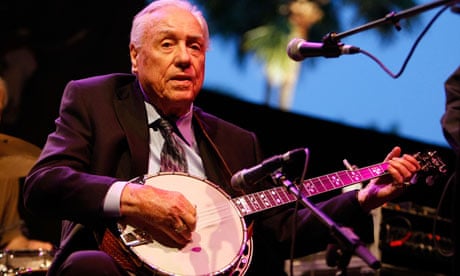 I spent a couple of months last year studying bluegrass in North Carolina, and I learned that there are is one tune you never ask a banjo player to play for you. Foggy Mountain Breakdown, Earl Scruggs’s most famous instrumental, is a tune so familiar, so oft-played, that even suggesting it at a jam will mark you out as an idiot know-nothing newcomer. It’s the equivalent of self-identifying as a Trekkie, when the correct term is Trekker.

If you know one banjo tune – well, if you only know one – it’s probably Duelling Banjos, and you probably heard it in the film Deliverance, or in one of the endless pastiches you can now watch on YouTube (my favourite is this one from Father Ted). But if you know two, then the other one, I will bet you now, was written by Earl Scruggs. Scruggs was the most influential banjo player there has ever been: he was banjo’s Bach, Beethoven and Bob Dylan all rolled into one. He pioneered the three-finger style of picking responsible for the sound you hear whenever you think of the instrument’s fleet-fingered, jangling sound. Until then, banjo players was played in the traditional “clawhammer” style – Scruggs’s use of the third finger allowed him to play the driving arpeggios that we associate with banjo music today.

And it was his virtuosity that brought banjo to the forefront of the newly emergent country music of the 1940s, where it had previously been an instrument of accompaniment (just like the guitar, or, as they say in the mountains, gee-tar). That new music was bluegrass, and Scruggs made banjo its defining sound. As the comedian Steve Martin wrote last year, in a tribute to his bluegrass mentor: “Few players have changed the way we hear an instrument the way Earl has, putting him in a category with Miles Davis, Louis Armstrong, Chet Atkins, and Jimi Hendrix.” Scruggs’s legacy is a sound that Martin could describe in just one word: “Unmistakable”.

I visited Shelby, where Scruggs was born, on my bluegrass travels. It wasn’t the most thrilling place to visit: a typical main strip where you must drive from one parking lot to the next to go shopping; one popular annual event is its festival of liver mush. But it knows its place on the map, and that’s why the first thing you see when you enter its city limits is the sign proclaiming “Birthplace of Earl Scruggs”. Today everyone in that town who owns a banjo will be out picking on their porch paying tribute. And, I suspect, for once, there will be an amnesty on Foggy Mountain Breakdown.